In  2010 the Murderdolls regrouped under the power of Wednesday 13 and Joey Jordison. They announced a new record and released some of the material on their Facebook page. They did not regroup with any of the other old members and recruited touring guitarist Roman Surman, bassist Jack Tankersley  and drummer Racci Shay and later on Jason “Shakes West. Mick Mars from Motley Crue helped on the record also for Drug Me to Hell and  Blood-Stained Valentine Mock film trailers were released for four of the album’s nonsingle tracks:  Drug Me to Hell,  Summertime Suicide ,  Death Valley Superstars, Chapel of Blood and the first single was My Dark Place Alone.

The record was called Women & Children Last as a pun to the classic Van Halen record. was released late August 2010. The image of the band was a lot darker and so was some of songs. The band went on the road to support the record. The second single from the record was Nowhere.

In 2013 Wednesday 13 announced the official end of the Murderdolls so this was the last record at this time. 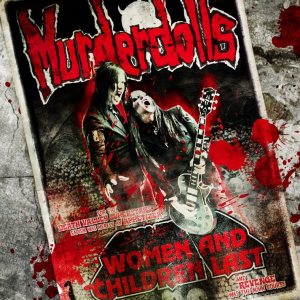 1 The World According to Revenge
2 Chapel of Blood
3 Bored ‘Til Death
4 Drug Me to Hell
5 Nowhere
6 Summertime Suicide
7 Death Valley Superstars
8 My Dark Place Alone
9 Blood Stained Valentine
10 Pieces of You
11 Homicide Drive
12 Rock N Roll is All I Got
13 Nothing’s Gonna Be Alright
14 Whatever You Got, I’m Against It
15 Hello, Goodbye, Die

Personal View – Personally was very excited for this record when it was announced but the record itself is hit and miss. Some of the record is very dark and heavy like My Dark Place Alone, Chapel of Blood, Death Valley Superstar and Bored ‘ Til Death which are great songs and fit the theme. But some of the songs sit out and stick out as they seem not to fit the record like Nowhere, Nothing’s Gonna Be Alright  and Summertime Suicide. Not that they are bad songs but they do not seem to fit the recipe of this record but maybe something from Gunfire 76.  The length of record is long which is great as there really is not a bad song on it.