Pyrohex is a group of female performers that are known doing stage performance around fire, blood and other theatrics. They started to build a connection with Wednesday 13 by joining them on stage during the Bloodstock Festivals. This included the one in 2017 and 2018 adding to the show. 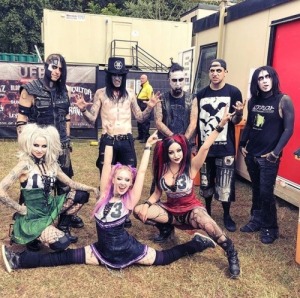 The group would dance around on stage and wear makeup and throw fire around. This included being part of the show as the twins from the Shining and even one time Shelley played as one of the walking corpses. 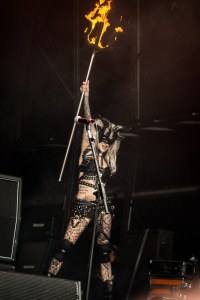 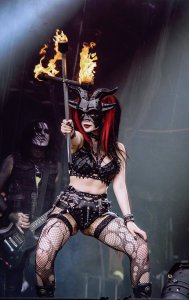 (Jack Tankersley behind Dani Divine as the devil fire woman)

(Dani Divine and Shelley D’Inferno together)

Pyrohex is made up of Shelley D’Inferno (engaged to Roman Surman), Dani Divine (dating Jack Tankersley) and Gem Dee when performing with Wednesday 13.

October 2018 Wednesday 13 did his Halloween again in the UK but this time he split it up over the weekend. The Friday night they did Skeletons from beginning to end to celebrate the 10th anniversary. (also Roman proposed to his girlfriend Shelly D’ Inferno on stage)The Saturday night Wednesday 13 did a special Frankenstein Drag Queens Set. That night Shelly proposed to Roman in drag.

Joe Letz stepped in fill in for Racci Shay in late 2007 on tour due to a family death during Skeletons tour.  Joe Letz was just a  fill in drummer for a few months as he was once the drummer for Amen and was the current drummer for Combichrist.  This was during the time Nate Manor, Staci Grim and J-Sin (Jason) Trioxin was part of the band.

The Florida punk horror band, Death Becomes You was the support band for Wednesday 13 during his first solo stint on the Graveyard A Go-Go tour in 2004. They played as an opening band and also the support band for Wednesday 13.  This was not to be a permanent solution just till he created his first main band with (at one time Ikky) Kid Kid, Piggy D and Ghastly to support the release of Transylvania 90210. 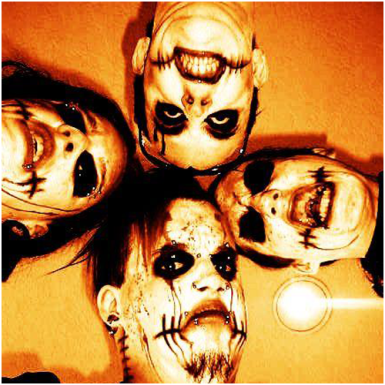 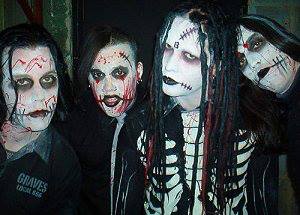 Wednesday 13 with Death Becomes You.

Brix Milner joined the Wednesday 13 band in 2006 to finish up the Fang Bang support tour to replace Eric Griffon on bass, which he left the band Dope for. He was replaced by Nate Manor. 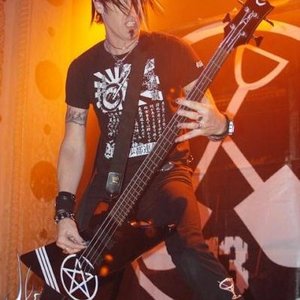 Staci Grim joined Wednesday 13 in 2007 to support the end of Fang Bang just before Skeletons at one point during the tour.  He played next to Jason Trioxin as the guitar player for about 2-3 months. 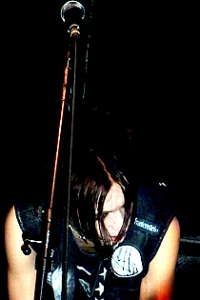 He later on and went and created his own band along with a group called the Infected.

Jason “Shakes” West came from a support drummer for Sebastian Bach,  he joined as a drummer for Wednesday 13 during the end of the Murderdolls tour for Women and Children Last, after that  they regrouped to record Calling All Corpses in 2011 . He did the record and finished the tour.

He was also part of the band during the recording of the EP Spook and Destroy in 2012. He continued in the band in 2013 for The Dixie Dead and also continued that tour to the end .

In 2015 Jason did the recording of the drums for Wednesday 13 for Monsters of the Universe. He did the first part of the tour but was replaced by the keyboardist Kyle Castronovo, who took over the drum role and went on with Evil United. 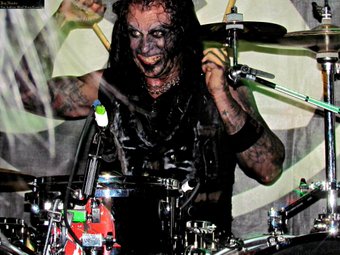 Jason got asked to fill in behind the drum kit in early 2019 on the Cradle of Filth support tour as Kyle had to leave for a few weeks for a family matter.

Jason Trioxin (aka Jason Heveran ), J-Sin came from his own horror punk band named Mister Monster. He  joined Wednesday 13 as a guitarist during the Skeletons tour to replace Jamie Hoover and can be seen and heard on the CD/DVD Fuck it , We’ll do it Live.

Jason was replaced by Jack Tankersley in 2010 and then continued as back to his own band Mister Monster . 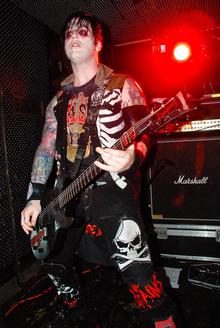 In  December 2018 it was announced by Wednesday 13 and his wife that Jason passed away due to a heart attack. 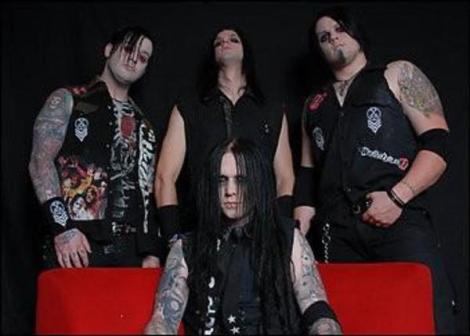 (Jason Trioxin on the left in the back)

Johnny Chops , real name Jonathan Henrich  joined as drummer for Wednesday 13 during the  Skeletons  tour. Johnny Chops replaced Racci Shay on drums for the tour and appeared on the live CD/DVD Fuck It, We’ll Do It Live. 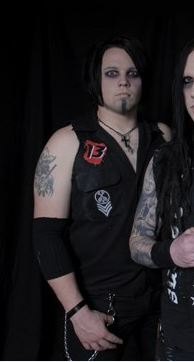 Johnny Chops was replaced by Jason “Shakes” West in 2011 and went on to join AntiProduct.

(Johnny Chops second from the left in band shot)

After leaving the band Amen in 2005 , Nate Manor joined Wednesday 13 as a bassist after the Fang Bang tour replacing Brix Milner. 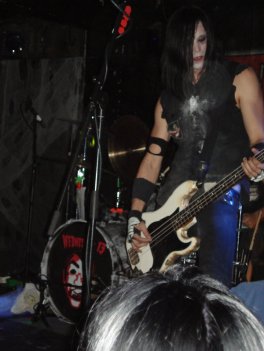 Nate Manor can also he seen and heard live in the CD/DVD Fuck it, We’ll Do it Live. In 2011 Nate was replaced as bassist by Troy Doebbler and went on to join The Birthday Massacre.

Nate Manor like Ramon Surman was part of Bourbon Crow with Wednesday 13 and Kid Kid and was involved in the Long Way to the Bottom record in 2009.

In 2010 Nate filled in as a bassist for the Gunfire’76 project replacing Scott Whalen.

In 2015 they released Monsters of the Universe: Come and Out and Plague. He did the full tour again as the bassist for the band.

(Troy Doebbler on the right)

In 2017 Troy continued with the band as the bassist and did the recording of Condolences and also was part of the support tour for that record. 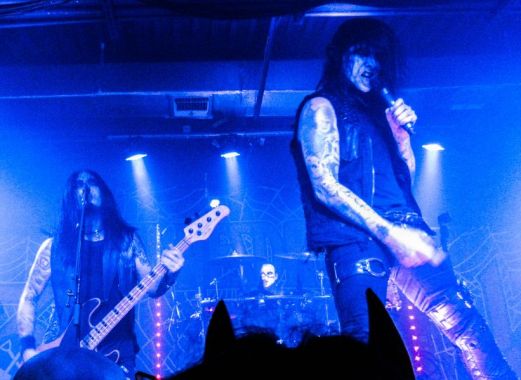 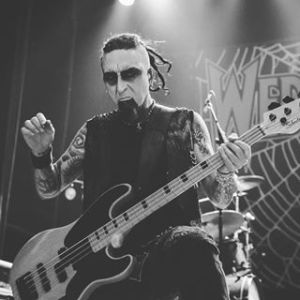 (Troy Doebbler on the left during the Condolences era)

October 2018 Wednesday 13 did his Halloween again in the UK but this time he split it up over the weekend. The Friday night they did Skeletons from beginning to end to celebrate the 10th anniversary. (also Roman proposed to his girlfriend Shelly D’ Inferno on stage)The Saturday night Wednesday 13 did a special Frankenstein Drag Queens Set.

Beginning of 2019 they started to tour again with the band but this time joined as a opener with Cradle of Filth. (with side opener Raven Black). His set list was dropped to  a smaller one as they toured North America again as a opening band.

In 2019 Wednesday 13 released a few singles off the new record Necrophaze. The first being Zodiac which they played live a few times before, Decompose, Bring Your Own Blood and the title track Necrophaze. 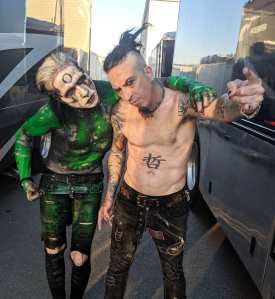 In September the record Necrophaze was released with the same members as before in the band W13, Roman, Troy, Jack and Kyle. Even this time on the record it has guest singers and the other members had more of a role in the writing.